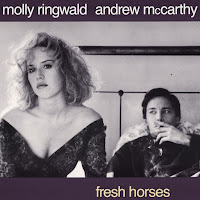 My first and only time ever on a movie set was for the 1988 film Fresh Horses, which starred Molly Ringwald and Andrew McCarthy. Clearly, Fresh Horses was meant to be a kind of not-quite-sequel to 1986’s Pretty in Pink, though it didn’t come anywhere close to matching its predecessor’s success. Fresh Horses was filmed in and around where I grew up in Cincinnati, Ohio. I was 14-years-old at the time and had been fairly obsessed with John Hughes’ mid-’80s high school dramatic comedies like Pretty in Pink and The Breakfast Club. So I was excited when I read an article in the Cincinnati Enquirer, our hometown daily newspaper, about how Fresh Horses was being filmed in town.

The only specific filming location that was mentioned in the article, and which sounded like it might be locatable for a 14-year-old kid, was a house on a rolling hillside in Union, Kentucky, across the Ohio River from Cincinnati.  I’d never been to Union, Kentucky, of course, but I figured that it couldn’t be a very big place. Determined to find that house where they were filming, I convinced a friend who was a couple of years older and who had a car to skip school with me one Friday, so that we could drive down to Kentucky. He was up for that and excited about it, too. This was in the fall of 1987, late October as I recall.

We arrived in Union, Kentucky, by sometime around noon. It was quaint and rural, basically just one long country road through bluegrass hills and fields of horses. Within a few minutes, we spotted the big white house on a hillside, set a little ways off the road. Lighting equipment was set up in metal clusters on the sprawling lawn in front of the house, but there was no activity going on at that point; as the abundance of idle lighting equipment clearly indicated, the day’s filming would commence after sundown. In the meantime, we drove around for a while, had a late lunch at a roadside diner, and returned to the house that evening, once it had gotten dark outside.

Then something happened that would never happen today in 2017. My friend parked his car in the grass alongside the winding gravel driveway that led to the house, he grabbed a big quilted blanket from the trunk of his car, and we sat beneath a huge tree to watch the movie being filmed from a safe distance. I remember seeing one security officer stationed on the property, a little further up the driveway. He took notice of us, but he didn’t say anything to us. Neither did anybody else. Nobody even approached us at all, perhaps thinking that we had some actual reason for being there. We sat there for hours, in fact, from about seven o’clock until sometime well after midnight.

During all of those hours, we saw only two scenes being filmed, both exterior scenes on the front porch of the house, and both with Andrew McCarthy. In one scene, he drove a car up to the house and parked, walked slowly up to the porch, peered inside the front door, then stepped off the side of the porch to walk around the side of the house. In the other scene, a fight broke out just inside of the house, between Andrew McCarthy’s character, named Matt Larkin, and some other random tough guy. Then the brawl tumbled out the front door onto the porch, with poor Andrew McCarthy’s character hitting the ground in front of the porch steps. I vividly remember hearing the punctuated shouts of Patti D’Arbanville’s character, Jean, who owned that big party house on the hill, trying to break up the fight.

Nevertheless, nothing in my experiences as a young filmgoer had prepared me for just how boring and repetitious being on the set of a film would feel. The seeming glamour of Hollywood and the artful deception of edited cinematic narratives had brainwashed me into thinking that film sets themselves would be equally glamorous. The scene of Larkin driving up to the house was filmed at least twenty times, with the movie crew trying to get the right take, and the fight scene on the porch was filmed about thirty times, maybe even more. Andrew McCarthy chain-smoked whenever there was a break between takes. I remember seeing him many years later, portraying Tom Wingfield in Tennessee Williams’ play The Glass Menagerie at the American Repertory Theater in Cambridge, and catching a glimpse of him chain-smoking yet again, out in the courtyard with the crew members during the intermission.

Perhaps because of the repetition involved in the filming, and the novelty of the whole experience, visiting that film set is indelibly engraved into my memory. I can replay the entire sequence of events in my mind anytime, like a little cinematic loop itself. It was fun, too, seeing how those two scenes had been incorporated into the film when it was released in theaters towards the end of 1988. Larkin’s little jump off the side of the porch to walk around to the side of the house, which ended right there with each take during the filming, is followed in the movie itself by his intense first kiss with Jewel, Molly Ringwald’s character, right up against the outside wall of that house. This was probably my first actual lesson about how storylines in movies aren’t filmed chronologically. I don’t think Molly Ringwald was even on the set of the film that night.

The screenplay for Fresh Horses was adapted from Larry Ketron’s stage play of the same title, and he adapted the screenplay himself. The play starred Suzy Amis as Jewel and Craig Sheffer as Larkin when it premiered in New York in 1986. It’s the story of a well-to-do college student, Larkin, who’s interested in engineering and design (constructing rides like rollercoasters, specifically), and his illicit romantic pursuit of Jewel, a street-smart country girl from across the river, who may or may not even be of age to be dating him. All of that comes out slowly during the course of the film, naturally, and with no little amount of melodramatic tears and formulaic effect. Fresh Horses is not a great movie, nor even a particularly good one. But that’s part of the reason why I wanted to write about it this many years later. How can a movie that’s not particularly good, and more than a little cheesy at times, still feel like it’s kind of good in retrospect because of how it attaches itself to one’s own youthful memories?

Larkin’s sidekick in the film, Tipton, is played by Ben Stiller, who makes a charismatic comedic impression in one of his earliest film roles; he’s cute and expressive and just manic enough. Tipton is meant to be Larkin’s reliable buddy and his social conscience, urging him to be more interested in the attractive college women at a pool party that they attend at a private home, rather than falling for the seductive girl from the wrong side of the tracks that Jewel represents. Larkin is still at that age when his homosocial friendships with other guys carry more weight than his fledgling relationships with women, including the self-righteous rich girl to whom he’s engaged to be married. That’s probably why the film opens with Larkin and Tipton cruising in a speedboat together at nightfall along the banks of the Ohio River, with a widescreen view of the iconic Cincinnati Reds baseball stadium and the Riverfront Coliseum all decked out in lights. Fred Murphy’s cinematography certainly captures Cincinnati’s gorgeous skyline exactly the way I remember it from childhood, as does David Foster’s wistful opening keyboard score, which takes me right back to the late 1980’s like nothing else really could. 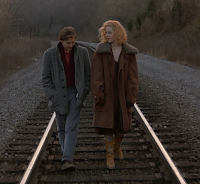 Much of the dialogue from Ketron’s original play translates well to the screen, even powerfully so in intermittent flashes, especially during scenes in a run-down, abandoned railroad shack, where Jewel and Larkin work through the mysteries of their attraction to each other and further seal their bond. Jewel’s given a handful of inventive monologues that cut deeper in those scenes. Although she’s the character who never graduated from high school, she’s the covert brain of the film, as well as its fierce heart, facets of the character that Molly Ringwald more than ably conveys. As Jewel’s name suggests, she’s the magnetic force at the center of the story; other characters simply react to her. She maintains the control, even if she’s still too young and naïve to know what do to with it. 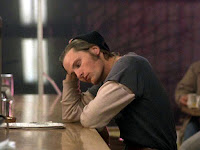 Later in the film, there’s also a riveting performance by a young, smoldering Viggo Mortensen, who plays Green, the ne’er-do-well husband whom Jewel manages to keep a secret from Larkin until later in the movie. Mortensen appears almost silently at a truck-stop diner mid-way through the film, and his only real speaking scene is for a few important minutes at the movie’s dramatic climax, when Larkin barges into the ramshackle home where Green lives with Jewel, in order to confront the two of them together. The way that Mortensen embodies Green’s cruel sensuality, and the tantalizingly lazy Southern drawl with which he delivers his hushed dialogue, should have rightly convinced anyone watching the movie back then that he would go on to have a major career as a film actor.

The moment that I remember most often from Fresh Horses is a quiet scene in which Larkin and Jewel walk together beside the tall, criss-crossing wooden beams of a rollercoaster at a closed-down amusement park in winter. The amusement park is called LeSourdsville Lake in Middletown, Ohio, a place that was located not too far from where I grew up in Cincinnati. I always loved amusement parks as a kid, even in the off-season. Recalling the towering structure of the rollercoaster and the image of a tiny couple embracing next to it, in clear contrast to its sheer size and height, I think that the scene works almost as a kind of metaphor for the immensity of time itself, and our own small space at the margins in the scope of it.
Posted by Jason at 6:37 PM No comments: