Everything but the Girl, Idlewild (Sire Records, 1988) 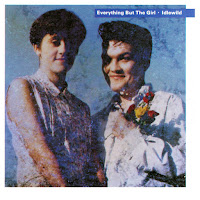 I remember about twelve years ago having lunch with a former friend and colleague, when Everything but the Girl’s “Oxford Street,” from their 1988 album Idlewild, suddenly came on the restaurant’s sound system. I was so surprised that anybody would even think of playing the song that I perked up and admitted — seemingly outdated ’80s tune though it was — that it had always been one of my favorite songs. My lunch companion replied incredulously, “Really?” and I think he even rolled his eyes at me a bit. To the uninitiated, it’s a song that sounds like a long-lost soft rock ballad that an adult contemporary radio station back then would have played. Not so cool or hip, he thought, despite my insistence that he just wasn’t listening to the song closely enough.

Before I say anything more about the album itself, I want to say something important about taste. The colleague I had lunch with is a former friend in part because I don’t think taste should be informed too much by fear of what others will think about our taste. Actually, I don’t think that sort of taste is really taste at all; rather, it’s fallout from some kind of juvenile peer pressure that creeps into the lives of many people I’ve known over time, and far past their middle school days. Genuine taste is not a form of social currency. It’s sensibility, a map of who we most authentically are as individuals, and that’s something I’ll continue to defend, and probably forfeit more friendships over, until my time here on earth is done. 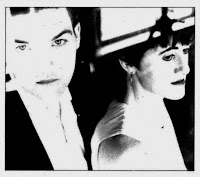 Ben Watt and Tracey Thorn recorded Idlewild three decades ago now, in the autumn of 1987, about five years into their career as a duo. When the album was released several months later, they were both 25-years-old. The sophisti-pop movement in the United Kingdom was still going strong, and I heard and loved it all from as far away as my childhood hometown of Cincinnati, Ohio. In a hilarious moment from a 1988 promotional interview, Tracey explained that Idlewild was titled after the original name of New York’s airport (now JFK) and said, “The Americans have this wonderful knack for naming their places with a kind of poetic imagination that seems to reveal itself nowhere else in their entire culture.” That's somewhat harsh, but also largely true.

Nevertheless, the homespun, measured tone of Idlewild, leaning away from jazz and more towards pop, was clearly aiming for an American audience, although Everything but the Girl wouldn’t begin to find an audience in America until their 1990 album The Language of Life. Lyrically, the songs on Idlewild are very much rooted in England, in a way that the Anglophile in me finds irresistible. “Oxford Street” poignantly thinks ahead to London life by reaching back to Tracey’s upbringing in Hatfield and her university years in Hull: “When I was ten I thought my brother was god, / he’d lie in bed and turn out the light with a fishing rod... / Then when I was nineteen, I thought the Humber would be / the gateway from my little world into the real world.” I think it’s the smart balance of lyricism and prosaic poise that makes me love this song so much, along with its vocals delivered through a calm evenness that only Tracey Thorn can pull off in exactly the way she does. 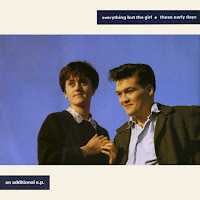 I had never paid much attention to the subject of “These Early Days” until I was listening to the album again tonight to write this review, even if this is an album whose music itself I know totally by heart, having listened to it literally hundreds of times. The song’s written for a child in Tracey’s life, a child who’s only two at the time. Its gentle refrain (“though you may weary of this vale of tears, / these days remember, always remember”) reminds me of Gerard Manley Hopkins’ famous poem “Spring and Fall” and the child Margaret in that poem (“yet you will weep and know why”), as she ponders the falling leaves and her own mortality. 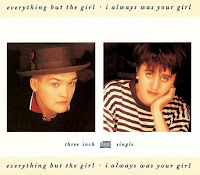 Another of the album’s four singles, “I Always Was Your Girl,” counterpoints its airy synthesizers and tenor saxophone with some down-to-earth humor, as Tracey sings of a couple who feel ill-at-ease in the world: “You put your friends through hell, / and that’s why we get along so well... / Self-assured and abusing guests, / that’s the way I like you best.” Ben’s wistful lyrics and vocals on “The Night I Heard Caruso Sing” extend the album into deeper territory (“if I only do one thing, / I’ll sing songs to my father, / I’ll sing songs to my child; / it’s time to hold your loved ones / while the chains are loosed and the world runs wild”). And on a sunny summer holiday in Italy, “Lonesome for a Place I Know” returns to dim rains of the UK: “The hedgerows and the townhalls... / something pulls, something I can’t define tells me England calls.” 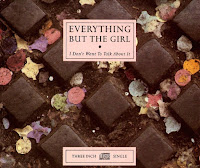 Some of the other songs on Idlewild got considerably more attention, including an ace cover of “I Don’t Want to Talk About It,” the song that was popularized by Rod Stewart a decade earlier, and “Apron Strings,” which the film director John Hughes selected, in a less subdued version, for the soundtrack of his 1988 movie She’s Having a Baby. The excellent B-sides from the album’s singles, such as “Hang out the Flags,” “Home from Home,” and “Dyed in the Grain,” also saw a second life when Idlewild was re-issued as a deluxe edition (with many home demos and outtakes) by Edsel Records in 2012. These extras are wonderful to have, of course, but so is the original album, which remains in my top five favorite albums of all time.
Posted by Jason at 3:30 AM No comments: