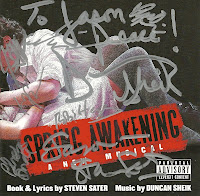 I’ve never been a huge fan of musicals. After performing in two of them back in high school — Grease and Brigadoon — it was clear that the form itself is often narratively flimsy, and sometimes even narratively non-existent. Almost exactly five years ago now, however, I saw the best Broadway musical that I’ve ever seen in my life, Spring Awakening. More of a pop/rock opera (based on Frank Wedekind’s 1891 German stage-play of the same title), this musical took the genre to places I’d never seen it go before, with lyricist Steven Sater and composer Duncan Sheik at the helm, alongside an ensemble of exceptionally talented young people in the original cast.

Adding to my excitement was that just a couple of hours before the show, I had the chance to meet Sater and Sheik at the now-defunct Virgin Megastore in Times Square, where they signed copies of the album with the entire cast, who performed two songs from the show as well (“Touch Me” and “Totally Fucked”), much to the surprise and delight of shoppers and onlookers. To own an autographed copy of the original cast recording is even more special, of course, because several of the show’s stars — including Jonathan Groff (as Melchior), John Gallagher, Jr. (as Moritz), and Glee’s Lea Michele (as Wendla) — have since gone on to other high-profile roles on stage and screen.

By the time we’d had dinner at Thalia and arrived at our seats in the packed and bustling theater, I was anticipating the show more than I’d anticipated one in a very long time. (The experience was made a bit more surreal because sitting directly in front of me and my friend was none other than Jerry Seinfeld!) I’d read some reviews of the show, yet I still wasn’t quite sure what to expect from it, though I’d admired Duncan Sheik’s music for a whole decade already. 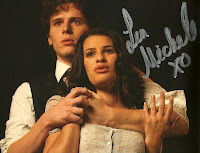 The musical itself actually began very quietly, barely even noticeably. Lea Michele walked onto the stage while the house lights were still up and stood on a chair (as I recall) to sing the show’s plaintive opening number, “Mama Who Bore Me.” Throughout much of the performance, members of the cast were seated in chairs at the sides of the stage, which was designed like an old-school classroom, with the backstage ropes and pulleys and bare brick walls exposed all the way at the rear of the space. Some audience members had been seated at the edges of the stage beforehand, too, discreetly shuffled in with the ensemble.

The set was dimly lit for most of the performance, appropriate to the age of the story, one that contains a significant share of heavy, shrouded topics. The original play was considered scandalous in its own time for addressing various taboo subjects — sexual desire, masturbation, abuse, suicide, abortion — all in relation to the lives of teenagers. Even in today’s more liberal world, teens are still often treated like non-sexual beings by the culture-at-large; as a result, those kinds of issues tend to get downplayed, silenced, or ignored by the adults in their lives. Sater describes the musical’s genesis in the liner notes of the CD, mentioning that he first gave a copy of the play to Sheik in the wake of the shootings that occurred at Columbine High School in 1999:

“Soon after, I called Duncan with an idea: what if the songs in our show functioned as interior monologues? Characters would not serenade one another in the middle of scenes — instead, the songs would voice only the thoughts and feelings of each character’s private landscape. (This seemed, after all, the point: when we keep the kids out of the conversation, we can’t hear what’s going on inside them.)” 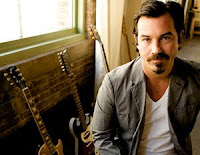 That Sheik’s score sounds so contemporary, both in style and delivery, is the musical’s greatest strength. These repressed German students from so long ago are given an opportunity to express their frustrations and hopes wholly in modern terms; the gift of time itself, and the social changes that history gradually allows, are affectionately granted to them. And to balance out that vibrant expressionism, the narrative threads of the original play are presented, for the most part, impressionistically, lightly binding the songs together here and there for cumulative effect.

I remember that on the train ride back to Boston from New York, I listened to the songs of Spring Awakening for the entire four hours. They hadn’t lost any of their power in the privacy of my headphones, and the pop elements that Sheik had planted in them sounded even more vivid on the recording than they did in live performance. The upbeat harmonies of “My Junk” appealed to me instantly during the show. A quartet of girls sings it to the character Hanschen, played by Tom Deckman, as he admires (ahem) a postcard of a beautiful woman. So many of the musical’s themes travel through the song’s verses: “It’s like I’m your lover, or more like your ghost / I spend the day wonderin’ what you do, where you go… / We’ve all got our junk, and my junk is you.” Later, Sater and Sheik tease out the title metaphor further, flirting with the notion of pop music as dreamy spiritual nirvana: “I go up to my room, turn the stereo on / Shoot up some you in the You of some song.”

The boys of the ensemble get their spotlight early in the musical, too, through the rollicking schoolhouse rock of “All That’s Known” and “The Bitch of Living,” capitalizing on how conflicted they feel in their adolescent stretches of agony and ecstasy (amply captured by Bill T. Jones’s jubilant, acrobatic choreography). During the appearance at Virgin Megastore, Sheik remarked that “Touch Me” is his favorite song from the musical, and it isn’t hard to see why. With its alternating pulses of longing that are quietly restrained and then suddenly overflowing, the song soulfully approximates the desire for physical intimacy felt by younger people, who are commonly, though understandably, kept at a distance from one another until they’ve reached a certain age. In this way, the bodies of the songs themselves replicate the bodies of the young characters and performers throughout the musical, permitting them access to realms of release and satisfaction that they might not find otherwise.

I can clearly recall and visualize how stunning the staging was for the numbers in the middle of the show, “The Mirror-Blue Night” and “I Believe,” strategically placed at the end of Act One, just before the intermission. The star-like, descending round lights of “The Mirror-Blue Night” perfectly matched the tone and spectral imagery of the song, whereas the simple device of a wooden plank suspended from ropes made an ideal, subtle platform for the prayer-like “I Believe.” Melchior and Wendla consummate their relationship upon the plank, while the other actors sit cross-legged on the stage surrounding them, gently swaying the platform from side to side. (The boys who like guys share a similar moment with “The Word of Your Body” when it’s reprised in the show’s latter half.)

Although the second act opens with Moritz’s song “Don’t Do Sadness,” the musical does proceed in that direction. His character’s increasingly frenetic disposition — which snagged Gallagher one of the show’s eight Tony Awards — spirals downward to a terrible breaking point, and most of the remaining songs refer back to that heart-stopping moment. Sheik’s poignant, guitar-centered score (with orchestrations by Simon Hale) is most affecting in that mode; I never thought any musical would move me to tears, but that happened three times. It’s rare for a piece of musical theater to construct itself around darkness and “the sorrow at the heart of everything” and actually pull it off, at least with an audience that’s willing to be taken there. 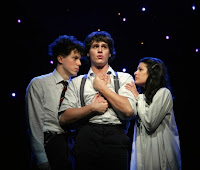 “Left Behind” and “Those You’ve Known” are for me the musical’s most powerful songs. Melchior mourns the loss of his friend Moritz with a piercing clarity that only the young are capable of, carried by Jonathan Groff’s pure-as-water vocals: “The talks you never had, the Saturdays you never spent / All the grown-up places you never went… / All things he ever lived are left behind / All the fears that ever flickered through his mind / All the sadness that he’d come to own.” The memories of those who’ve been lost culminate in a scene that's set in a moonlit graveyard, where the ghosts of Moritz and Wendla join Melchior to sing “Those You’ve Known” (borrowing the melody of “All That’s Known” from earlier in the show). At their emotional apex, the song’s poetic lyrics remind me of the countless brilliant people who died during the AIDS epidemic, as well as those who've survived them:

“Now they’ll walk on my arm through the distant night,

And I won’t let them stray from my heart.

I will read all their dreams to the stars.

I’ll walk now with them, I’ll call on their names.

I’ll see their thoughts are known.

The show's contemplative yet rousing finale, “The Song of Purple Summer,” reunites the ensemble at the front of the stage, in a line-up that’s reminiscent of “Seasons of Love,” the heartfelt hit from Rent, that other popular mainstay of the contemporary American musical-theater idiom, which Spring Awakening resembles on several levels. But Spring Awakening also holds the distinction of being thoroughly authentic and unique.