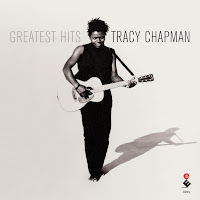 It’s hard to believe that thirty years have passed since Tracy Chapman released her self-titled debut album in 1988. Several songs on the album — “Talkin’ Bout a Revolution,” “Fast Car,” and “Baby Can I Hold You” — still sound as relevant and timely today as they did when they were recorded. Perhaps that album’s directness and simplicity is one reason why it was a global hit in fifteen countries internationally. The songs wear their messages plainly, delivered in Chapman’s strong yet delicate voice that sounds like nobody else’s, combining elements of old-school blues and contemporary folk with flourishes that approximate world music chants. Chapman got her start busking on the streets and subway platforms in Harvard Square in the mid-’80s, a few years before I arrived in Cambridge myself. Anytime I hear her music, I get the same feeling as when I see a sudden stand of unexpected sunflowers somewhere in the city.


Ever since Chapman’s remastered Greatest Hits compilation was released a few years ago in 2015, it’s the album that I’ve probably listened to most whenever I’m driving around on road trips here in New England. This selection of eighteen songs spans her entire career and distills what’s best about Chapman’s music: its consistency, diversity, and quality that somehow remains quietly outside of what’s typically expected of commercial artists. Her songs usually fall into one of two categories, with lyrics focused either on social consciousness or on love and intimate relationships. Chapman approaches these subjects in similar manners, emphasizing that human interactions in the wider world require a kind of close and caring attention just like romantic relationships do, a commentary on how love and the lack of it have an equal impact across both our public and private spheres.


“Baby Can I Hold You” is a perfect and plaintive example of that balancing act. Chapman’s lyrics straightforwardly take account of a one-way relationship, as the singer’s lover is told that words like “sorry,” “forgive me,” and “I love you” are “all that you can’t say,” even though “baby can I hold you” is spoken freely and frequently. The song’s gentle tone smartly coerces the listener into thinking that this is a love song (and one famously covered by the Irish boyband Boyzone, no less), but on closer inspection, it’s quite the opposite. In our current era, during which sexual and power imbalances have finally come under serious scrutiny, the song’s deeper meaning resonates more fully.

Similarly, I remember hearing Chapman perform her song “The Promise” in concert at Harvard University’s Sanders Theatre when I was in college back in 1995. A meditation on lost love and remembrance and waiting for its return, “The Promise” was only the second song into Chapman’s set-list that night, but most of the people sitting around me in the audience were already in tears. It was the only time I ever saw Chapman perform live, and it’s also the last time that I witnessed an artist move listeners so swiftly and collectively. Chapman’s other love songs, like “Open Arms,” “Smoke and Ashes,” and “Sing for You,” still have that kind of effect on me when I hear them today. (There’s also a beautiful denouement on this compilation, Chapman’s solo rendition of “Stand by Me,” performed on The Late Show with David Letterman.)


Chapman’s more political songs, however, are the ones that she’s become best known for recording. She’s always been a protest singer in the classic sense, clear-eyed and fearless in her mission, as well as steadfast and disarming. How is it that her song “Bang Bang Bang” from 1992 isn’t a major anthem for gun control in the United States today? And furthermore, how is it that gun violence in our country has become so much more entrenched and devastating in the years since then? Tracing our culture’s terrible mistakes (“What you go and do / You go and give a boy a gun”), Chapman presciently examines the exploitation of masculinity and police brutality, then escalates her theme profoundly in the song’s final lyrics: “Before you can bridge the gulf between / And embrace him in your arms / Bang bang bang / He’ll shoot you down.”


That these social problems are no closer to being solved is the reason why Chapman sings, in the very first song on her first album, “Don’t you know / They’re talkin’ bout a revolution / It sounds like a whisper.” Nevertheless, such songs as “Subcity,” “Crossroads,” and “All That You Have Is Your Soul” remain potent critiques of the ravages of global capitalism, as well as point-blank takedowns of governmental ineffectuality and malice. No other mainstream songwriter has had the courage to sing, “I’d like to give Mr. President my honest regards / For disregarding me.” Clearly, and painfully, these lyrics have never been more true.

When I posted my list of fifty favorite songs here on my blog a few years ago, I included Chapman’s “Fast Car” on the list, of course. Because of its lyrical ambition and emotional complexity, I think it’s still one of the best folk songs ever recorded in a pop setting. (Some pop acts have done wonderful covers of it, too, like the electronica band Swimming with Dolphins and Mutya Buena of the British girl-group Sugababes.) The song is too close to me and also too legendary to say anything more about it, except that “Fast Car” has done exactly what its closing lines promised; it’s kept driving Tracy Chapman’s music and career through her artistic history, and it will keep doing so right up until pop music’s twilight years.
Posted by Jason at 12:17 AM No comments: