Some Thoughts on Record Stores 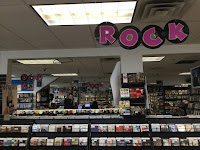 I’ve adored record stores for my whole life, or for at least as far back as I can remember, and I miss record stores more and more as they continue to disappear year after year. Ani DiFranco’s song “Fuel,” from her 1998 album Little Plastic Castle, traces the etymology of our word “record” when DiFranco semi-raps, “People used to make records / As in a record of an event / The event of people / Playing music in a room.” Records, therefore — at least in physical formats — are living history re-capturing an original performance, recorded musical documents that allow the documented event (as well as its sonics and lyrics) to be disseminated far and wide, into the rooms and automobiles and earphones of listeners all over the world. 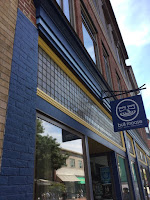 This weekend while I was traveling in New Hampshire and Maine, I stopped in to browse at a couple of record stores that are still around, actually the last real record store chain that exists up in northern New England, which is called Bull Moose. The location in Portsmouth, New Hampshire is a standard downtown storefront, while the one located in Scarborough, Maine is closer to being a superstore, a massive warehouse of CDs and DVDs, situated in a sprawling strip-mall alongside the interstate highway. I fully realize that almost nobody else but me cares at all about physical media like CDs and DVDs anymore, and that’s why I want to say something about all of that right now, while physical media of all forms are clearly in their twilight years, no doubt destined to fade away gradually, or perhaps quite soon.


I’ve collected music for over 30 years, and throughout those decades, I’ve amassed a sizable library of compact discs, neatly shelved and alphabetized. Searching for music in record stores was always (and still is) a kind of deep therapy for me. I can just zone out and work my way straight from A to Z, looking at everything that’s in stock…and I’m not kidding when I say that I browse the entire store because I often scan through every aisle and every genre. Why? Because record stores are carefully curated catalogs of humanity, and I’m someone who prefers to encounter other human beings via the things they create. I listen to music pretty much every moment of each day, and more than anything else that I love in pop culture, music is the one art form that has kept me alive. Even more than I think about what music and songwriters and musicians have done for me, I think about what I can do for music.


Finding and purchasing music at record stores (probably way too much of it, honestly) was my main way of giving back to the people who created it, in addition to buying tickets to attend their concerts, as well as writing reviews of their music now and then. Paying my hard-earned dollars to hold a multiform physical artifact of that music in my hands, along with the album art, liner notes, and lyrics in most cases, has always felt to me like a sort of friendly exchange or handshake, as if something was made just for me, and other people can buy and enjoy it, too, if they want to do so.


Obviously, online streaming and downloading of music files have mostly killed those special qualities of the physical format, swiftly sidelining it to obsolescence, while also changing the profit game for music creators, who now rely mainly on ticket sales from concert tours to make their living, as everybody already knows. I’m not suggesting that digital music formats are totally without advantages. I really love my iPod Touch. It’s also far healthier for our planet and for our environment if we reduce the amount of unnecessary oil-based plastics used in the largely wasteful production of compact discs and the jewel cases that house them. Plus, discs get scratched, jewel cases crack, CD booklets crease and tear, just as physical objects of any kind deteriorate over time, in spite of how well we might try to take care of them.


Even those scratches on a disc and cracks in a jewel case might serve some type of purpose, however, because they personalize and mark as unique what is essentially just one of thousands of identical mass-produced products manufactured for global consumption. In his 1935 essay “The Work of Art in the Age of Mechanical Reproduction,” the German Jewish philosopher and cultural critic Walter Benjamin argues that reproduction causes the original work of art over time to lose its perceived authority and aura. Benjamin famously proposes that “technical reproduction can put the copy of the original into situations which would be out of reach for the original itself.” Only a limited number of people can watch an actual live musical performance, even one that plays in a huge arena. “Above all,” Benjamin continues, the mechanical reproduction of the work of art “enables the original to meet the beholder halfway, be it in the form of a photograph or a phonograph record.”


It goes without saying that records as physical artifacts can also get destroyed or lost, whereas digital music files (at least those stored in digital cloud networks) are “lossless.” The real problem is that, when compared to the experience of browsing for actual objects in record stores, streaming or downloading music also feels soulless. Record stores, despite their often jaded, under-compensated employees and blatant capitalist aims, also open up the possibility of community, of potentially meeting like-minded music admirers who share very specific interests and enthusiasms. Though who knows? Maybe one day when music is streamed directly into our brains by some vast governmental/corporate entity, even downloaded digital files might seem more personalized and quaint somehow then.


I’m aware that record stores can be seen as totally soulless, too, just empty commercial spaces that we fill up with wall-to-wall merchandise to sell and then eventually vacate. Yet at least record stores used to make it possible to be in the presence of other people while looking for music, rather that sitting alone in a room staring at a computer screen, the exact opposite of how Ani DiFranco describes musical “records” getting made. I wish that I could trace my way back to the hours upon hours that I’d spend wandering the aisles of Tower Records overlooking Newbury Street in Boston, HMV in Harvard Square, Virgin Megastore in Times Square — right in the pulsing heart of New York City — and all three of those same record stores within a few strides of each other in London’s Piccadilly Circus. But sadly, those days are long gone now.
Posted by Jason at 1:33 AM No comments: