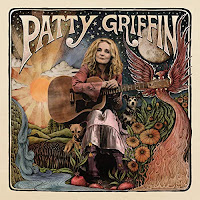 The latest self-titled album by celebrated singer/songwriter Patty Griffin, her tenth studio album, is her best in fifteen years. Griffin’s albums are always superb, and each one is filled with songs that add depth and character to the American songbook, but her new effort for me is her consistently strongest record since 2004’s Impossible Dream, which is an album that I still love and listen to frequently today. Over the past few years, Griffin dealt with a cancer scare (in her new album’s liner notes, she thanks “the Docs and their magic”), and given just how solid these songs are from start to finish, I almost wonder if being faced with such a frightening situation had some effect in that regard. Receiving any serious medical diagnosis — one that’s now been successfully treated in Griffin’s case — would probably prompt something of a re-boot for most artists, or a re-examination of their approaches to their own art form. There’s a sense of purity and distillation in these thirteen new original tracks, as well as power and daring, performed with Griffin’s reliable players in styles ranging from folk to blues to near-classical balladry, endowed with Griffin’s distinctively rough-hewn vocals and lyrical dexterity.


I’ve listened to this album continually since its release a couple of weeks ago, and many of the songs feel tied for me to the last time I saw Griffin in concert this past summer on a warm night in early August, at the opera house in the picturesque oceanside town of Boothbay Harbor in midcoast Maine. Patty is a native of the state of Maine; she grew up in Old Town, a small town located mostly on Marsh Island, just about 100 miles inland from the harborside opera house where I heard Griffin perform. She mentioned during the show that she remembered from her childhood passing by those kinds of buildings throughout Maine while driving with her parents in their family car, venues that were often in states of neglect and disrepair back then, and how wonderful it is to see so many of those buildings restored today for community and performing arts purposes.


At that same concert, Griffin also performed one of her new album’s finest songs, “River,” for the very first time before an audience, with her skillful accompanying guitarist David Pulkingham. It happened to be former President Barack Obama’s birthday, so she dedicated the song at that show to him. The song feels especially relevant in the wake of the #MeToo movement: “Isn’t she a river? / She doesn’t need a diamond to shine… / Arms made out of silver / Moving in a crooked line / Carrying some dreamers / Off into the end of time.” This seeming aerial view of the river’s topography creates a kind of cumulative portrait of the unbendable force and endurance of all women over centuries and landscapes (“‘Cause you can’t hold her back for long / A river is just too strong… / You don’t need to save her / Or teach her to behave / Just let her arms unwind / Ever-changing and undefined”).


The image of rivers also plays a central role in another of the album’s strongest songs, “Where I Come From,” a vivid homage to Griffin’s memories of her hometown of Old Town, Maine. “Where I come from / Is a land of many islands,” Griffin sings, “Two rivers run / To the east and to the west.” Looking at the map of Maine, I was surprised to see that it’s true, even 100 miles inland; Old Town is formed by numerous small islands, and you can even clearly see where the land has separated as those islands have gradually been surrounded by waterways over time. Despite how Griffin mentions that “I wanted to run far away as I could / As fast as I could get,” her rural hometown is also a place she finds impossible to forget (“No matter where I’ve been / I can’t escape who I am”). The people and struggles of Old Town stay with Griffin, too: “The veterans of all the past wars / Sit outside on a Sunday afternoon / The mills closed down long ago and so / We’re way past unemployment / Like a bad joke somebody told on our town / For their enjoyment.”

Midway through the album is its emotional centerpiece, the piano ballad “Luminous Places,” already among my top five favorite songs by Patty Griffin. I recall when she told the audience at her show in Boothbay Harbor that she’d asked her booking manager to take her only to the most beautiful places for the concerts on that particular tour; some other stops included Truro on Cape Cod and Edgartown on Martha’s Vineyard. Her comment made me wonder if this gorgeous, classically inflected song (with cello and guitar accompanying the piano) grew out of that concert tour. The song begins and ends with the delicate lines, “Love flows out of these luminous places / Love lies down in the deep of the sea / Falls out of the sky in millions of pieces on me.” The rest of the lyrics reflect largely on Griffin’s cross-country travels throughout her career as a touring musician, a common subject for folksingers, but she elevates it to another level: “I’ve been over these highways for years in the dark / Criss-crossing the land like a stitch on the wound / Rolling through the night while millions were sleeping / Under every phase of the moon.”


What’s most impressive is the metaphor for how live music can bring people together despite these divided times in the United States, “like a stitch on the wound.” Too often these days, it’s a belabored topic even in the creative realm, but Griffin knows not to belabor that theme, instead making it only a single necessary stitch in the song, albeit a mournful one. She’s also able to connect the years of her music career movingly back to the early days of her youth: “All that I am is a dream that I had / One morning so early and blue / It flew over the river and the freezing bus stops / On a song that I sang to you.” Dreamers are invoked often on this album, so frequently that it becomes a dreamer’s album; its songs are part of a cycle crafted to revivify lost and forgotten dreams.


Elsewhere on the album, Griffin weaves in an allegorical murder ballad from the age of maidens and pirates (“Bluebeard”), a harrowing tale of her ancestors’ immigration from Ireland (“Boys from Tralee”), as well as upbeat meditations on time and change (“Hourglass” and “The Wheel,” which offer stark commentaries on issues from the corruption of the political machine to rampant police brutality). The album is bookended and threaded through with a handful of jazz-inspired numbers (“Mama’s Worried,” “Had a Good Reason,” “What I Remember,” and “Just the Same”), and the great Robert Plant also contributes memorable vocal assists on two of the album’s tracks (“What Now” and “Coins”). Similar to the album’s mystical cover art — which depicts Griffin and her two little dogs surrounded by sunshine, the moon and stars, waterfalls and fields of wheat and sunflowers, symbolic pomegranates at her feet, a phoenix rising from the fire and ashes — the songs on the album create a complex and living tapestry of America.


I remember the very first time that I heard Patty Griffin perform live in concert, opening for Ellis Paul at Somerville Theater here in the Boston area in 1995. She walked out on stage shyly, with big crocheted flowers and daisies stitched to the legs of her blue jeans, and commandingly launched right into one of her best early songs, the hardcore blues belter “I Write the Book.” She sang with such forthright conviction that it was clear to anybody in the audience that Griffin’s art would be her way of claiming her place in the world. Nearly 25 years later, I feel grateful to be still in the audience, receiving and appreciating her art.
Posted by Jason at 12:50 AM No comments: