Some Thoughts on Cinemas

One morning a few years ago, I woke up from a dream that I’d been watching a movie at a little cinema in Harvard Square. The layout of the cinema felt very real to me. The entrance and ticket booth were located at street-level on JFK Street. Downstairs from the box office and concession stand were two long skinny auditoriums behind two slim doorways that sat side-by-side. Despite how familiar the space seemed to me within the world of the dream, I wasn’t sure if it had been an actual place or just a fabrication of my sleeping mind. When I was awake enough to start thinking about it more deeply, trying my hardest to remember something that now seemed to be long gone, I reached over to grab my laptop from my bedside nightstand.

I searched online and found only a few ghost-like traces — a brief mention of it on somebody’s film blog, some photos of old print ads for the theater — to prove that this cinema in my dream had indeed once existed: it was called the Janus, and I’d frequented it semi-regularly when I worked in Harvard Square in the mid-1990s. The Janus permanently closed its doors before that decade had ended. I can still recall quite vividly that I’d watched Jonathan Demme’s Philadelphia there with one of my first boyfriends, a tall and handsome Mormon guy from Utah who was then a graduate student at Harvard. Of course, Tom Hanks went on to win an Oscar for playing a gay man who died of AIDS in that movie, a film that’s very much of its era in that the AIDS epidemic remained a serious concern among gay and bisexual men at the time Philadelphia was released. I’d also seen Tim Robbins’ movie Dead Man Walking at the Janus, for which Susan Sarandon won an Oscar for playing a nun who counsels Sean Penn’s death-row inmate before his execution. I was young then back in my twenties, and I remember crying a lot during both of those movies.

One day I also took a long lunch break to head over to the Janus to watch my very first film starring Alain Delon, René Clément’s 1960 French thriller Plein Soleil, based on Patricia Highsmith’s 1955 novel The Talented Mr. Ripley. I became fairly obsessed with seeing all of Alain Delon’s early films after that, and young Alain Delon remains my favorite face in cinema to this day. I was fortunate in that I’d grown accustomed to subtitles during high school, when I convinced a friend to go with me to see our very first foreign film, 1990’s Cyrano de Bergerac with Gérard Depardieu, at the gorgeously restored Esquire Theatre in the downtown Clifton neighborhood of my hometown of Cincinnati, Ohio. That same friend returned to the Esquire with me the following year to watch Isabelle Huppert as the title character in Claude Chabrol’s adaptation of Madame Bovary. 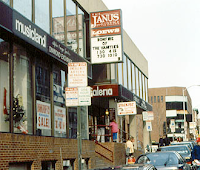 Because I remember all of these kinds of details so well, it’s a mystery to me how I could have forgotten about the Janus in Harvard Square less than two decades later, and that only one of my random nighttime dreams could have returned me there. Why had the experience of seeing movies at that little cinema engraved itself so deeply in my memory that I may not have recalled the place in waking life, but the dreamworld was able to transport me back to it? Plenty of people have written about the relationship of movies to memory throughout the past century, but I think my dream speaks to something that’s equally important: how the special cultural ritual of moviegoing shapes our minds via the spaces in which we encounter art, and how exactly that ritual puts us in close physical proximity to films that we carry forward with us, to the extent that they intimately surround us, whether we fully remember those spaces or not.


This is especially worth thinking about now since my fear is that this significant cultural ritual at present is in the process of gradually becoming lost over time. I’ve read several in-depth articles recently that examined various demographics among cinema fans and concluded that the younger generation of filmgoers — those who are currently in their twenties or teenage years — don’t really go to the movies like we did when I was their age. They might go to see a movie every now and then, like a superhero blockbuster, a romantic comedy, or a popular horror flick, but most younger people don’t “go to the movies” as a matter of routine anymore. Obviously, the internet and online streaming have changed all of that, and it’s easier to stay at home and watch most films for little to no money in the comfort of a living room or bedroom.


Cinemas are trying to attract patrons in various ways lately, adding benefits like roomy “luxury” reclining seats, specialty concession stand items, and alcoholic beverages, while raising ticket prices to levels that make less and less sense for customers to pay, considering that movie audience members can turn out to be annoying or disruptive more often than they’re quiet and considerate of people around them. As often as I’ve been in a cinema auditorium that’s more than half full over the past few years (and I’m someone who usually watches two or three movies at the cinema every week), I’ve been in an auditorium that’s totally empty except for myself almost as frequently, so that I’ve gotten to have some nice private screenings, an indication that cinemas are now an aging business model that probably won’t remain sustainable anymore at some point in the near future.


I also remember David Lynch, about a decade ago now, saying that he’d been in a cinema recently and didn’t think it felt like movies would really be at home in moviehouses for too much longer. I hope he’s not right, though it does increasingly seem like cinemas will become more of a cultural novelty fairly soon. I think they’ll always be around, especially in urban areas, but perhaps in a more limited and rarified capacity, just as record stores of all sorts started to disappear after the advent of online streaming and digital downloads, which have now saturated global culture in a far-reaching and widespread way. As usual, community gets subsumed by consumerism.


Just last weekend, I went to a small-town cinema in Wellfleet on Cape Cod to see the movie Sonic the Hedgehog (believe it or not), during the film’s opening weekend. It was the 7pm screening on a Sunday night before a Monday holiday, and including myself, there were seven people total in the audience: a dad with a young son and daughter who were about 8 and 10 years old, a brother/sister pair in their early teens (whose parents were in the auditorium next door watching Parasite), and a young military guy in mud-spattered camouflage fatigues sitting by himself along the aisle.


That cinema in Wellfleet has the same kind of long skinny old-school movie auditoriums that the Janus in Harvard Square had back in its heyday. While it was a bit of a sad sight to see this slight scattering of people spread out in the dark auditorium, it was also reassuring that some parents were still taking their kids to the movies at a cinema these days, trying to hand down a tradition that had no doubt been important to them during their own childhoods. Even in a light-hearted movie like Sonic the Hedgehog, there were scenes worthwhile enough to enjoy and lessons to be learned. Whether those kinds of cinematic moments will still be learned from and enjoyed within the walls of a movie theater for many people in our culture a generation or so from now remains to be seen, yet it’s a dream that’s worth keeping alive.
Posted by Jason at 12:30 AM No comments: