The Music of James Ingram 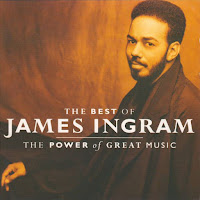 The undeniably great vocalist — and my fellow Ohio native — James Ingram died this past week at age 66, following his struggle with brain cancer. He possessed one of the most distinctive voices in American popular music, with his commanding warmth that was as authoritative as it was intimate. I hesitate to label Ingram strictly as a soul/R&B singer, for reasons that I’ll return to later in this post. Certainly, he was one of the finest singers in that particular genre, second only to Luther Vandross for sheer range and versatility. James Ingram also belongs in the same constellation with Whitney Houston, Michael Jackson, Tina Turner, and Anita Baker, all powerhouse singers whose voices are so entirely their own that they transcend easy categorization. James Ingram’s voice was its own genre.


As other pop artists’ tributes to Ingram appeared online over these past several days, the most important remarks came from Quincy Jones, Ingram’s closest collaborator and the producer who most helped to shape Ingram’s career. In his comments on Twitter and Instagram, Jones described Ingram’s voice as “whisky sounding,” which captures the sense of feeling whisked away by the lofty timbre of Ingram’s vocals, or perhaps might even refer to whiskey as a drink. Maybe that’s even more apropos, considering the relaxed amber heat of Ingram’s voice, always smoothly spiked. A baritone with an effortless falsetto, Ingram’s voice aged finely, yet many of his best recordings seem hardly to have aged at all. He was also an accomplished pianist, who got his start as a musician playing and singing background vocals for soul icon Ray Charles.


Ingram first found a wider listenership on Quincy Jones’ 1981 jazz/funk fusion album The Dude, to which Ingram contributed vocals on three songs: the opening title track, the soul classic “One Hundred Ways” — a #14 Billboard hit and winner of the 1982 Grammy Award for Best R&B Vocal Performance — and most notably, “Just Once,” another Grammy nominee (for Best Male Pop Vocal Performance) and a #17 Billboard hit for Jones and Ingram. It was through hearing Ingram’s vocals on the demo recording for “Just Once,” written by Barry Mann and Cynthia Weil, that Jones originally discovered Ingram’s talents. Ingram also received a Grammy nomination for Best New Artist as a result of his appearances on Jones’ The Dude. “Just Once” was featured in the 1982 film The Last American Virgin and probably remains Ingram’s most recognizable song today. When he sings the line, “Make the magic last for more than just one night,” just as Ingram’s voice was its own genre, the true magic in that song is Ingram’s voice. 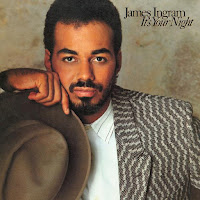 Ultimately signing James Ingram to his Qwest Records label on Warner Bros., Quincy Jones produced Ingram’s 1983 debut album, It’s Your Night, a more extensive showcase for Ingram’s vocal acrobatics, especially on Ingram’s duet with blue-eyed soul legend Michael McDonald, “Ya Mo B There,” another Top 20 Billboard hit for Ingram, which received a 1985 Grammy nomination for Best R&B Song and won the Grammy for Best R&B Performance by a Duo or Group with Vocals. Ingram's and McDonald's voices as they harmonize both complement and blend indistinguishably into each other, almost giving rise to an ethereal third voice in the song. Other strong cuts from the album include ballads like “There’s No Easy Way,” “Whatever We Imagine,” and the Oscar-nominated duet with Patti Austin, “How Do You Keep the Music Playing?” from Norman Jewison’s 1982 movie Best Friends, a romantic comedy starring Burt Reynolds and Goldie Hawn. Of course, Ingram and Austin had paired up before on “Baby, Come to Me,” taking that song to the top of the Billboard charts, thanks to a boost when it was featured as the love theme on the daytime soap opera General Hospital. 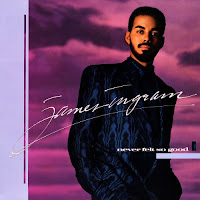 For his sophomore album in 1986, Never Felt So Good, Ingram teamed with Trinidadian co-writer and producer Keith Diamond, who’d previously created hits with Billy Ocean. The album’s songs aimed for a mainstream radio audience but fell somewhere between pop and R&B, never firmly landing on either side of that divide, so fewer of this album’s tracks are well-known today. Still, solid numbers like the album’s opener, “Always,” sound excellent now despite (or because of) the mid-‘80s synthesizer timestamp; a standard upbeat “always and forever” love song, the appeal of “Always” for me has more to do with its slightly brooding mood and how Ingram’s voice flows up and down the scale in ways that few other vocalists from that era to the present day have been able to match successfully. The album’s title track and songs like “Red Hot Lover” dovetail well with the electronic technology that dominated the pop music industry throughout those years. 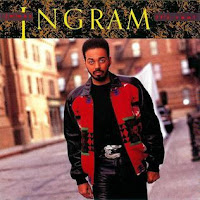 Ingram returned to the spotlight in 1989 with the release of It’s Real, his third album and the last one to see major action on the charts, namely with the heartbreaking ballad “I Don’t Have the Heart,” which rose to Billboard’s #1 position in 1990 and also fared well as an Adult Contemporary single, though the response of R&B radio was more lukewarm. By this time, just as the hip-hop revolution was on the verge of beginning, Ingram had already begun to seal his fame as a successful crossover artist, mainly through a string of songs featured on Hollywood movie soundtracks. The best-known of those songs was “Somewhere Out There,” Ingram’s duet with Linda Ronstadt from Don Bluth’s 1986 animated feature film An American Tail. Ingram’s other soundtrack numbers and duets (with everyone from Dolly Parton to Anita Baker) included songs from a diverse roster of mainstream fare: Beverly Hills Cop II, City Slickers, Beethoven’s 2nd, and Forget Paris. 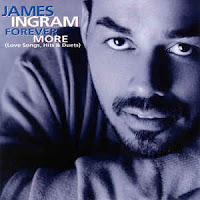 Questlove, drummer for the band The Roots, perceptively commented on Instagram after James Ingram’s death that Ingram comfortably came to inhabit a place that would have otherwise been occupied by vocalists like Kenny Loggins or Barry Manilow. While Ingram’s early R&B career was jump-started by Quincy Jones, Ingram also moved in circles that included soft-rock producers like David Foster, and eventually, even new-age musicians like John Tesh. Nevertheless, at the level of his voice, Ingram never strayed far from his R&B origins and always retained a sound that was totally identifiable to those who were already familiar with his vocal legacy. That precise territory remains Ingram’s alone, and I can conclude with certainty in predicting that no other singer will ever sound exactly like him.
Posted by Jason at 6:47 PM No comments: