If lists of our favorite things are like tiny blueprints of our personalities, then my favorite films of 2016 certainly indicate a good deal about me. All five movies that I’ve selected to write about below, in looking back on all the films that I saw this past year, are quiet and fairly independent; with a couple of exceptions, they’re films that relatively few people watched at cinemas. Accordingly, the cinema itself, as digital technology becomes more and more widespread, seems less and less like the place where movies will eventually be housed with each year that passes. If that’s indeed the case someday, I can’t overstate how much I’ll miss the particular experience of filmgoing and its significant place in the culture.

Because they intersected so perfectly at the crossroads of movies and music, I loved John Carney’s two previous films, Once and Begin Again, so I anticipated enjoying his latest film Sing Street equally as much. What I didn’t foresee was just how deeply his new movie would resonate with me. This is mostly due to its ’80s throwback sensibilities, as well as its superbly crafted musical numbers, which were composed by Gary Clark, who scored an international hit called “Mary's Prayer” all the way back in 1987 with his band Danny Wilson. The title Sing Street is a clever play on Dublin’s Synge Street, as in Synge Street Christian Brothers School, where the film’s protagonist, Conor (Ferdia Walsh-Peelo), is a student and aspiring musician from a working-class family.

Conor puts together a rag-tag band mostly to impress Raphina (Lucy Boynton), an older girl who catches his eye while standing across the street from his school. What follows is the closest any director has come to matching the late John Hughes’ classic mid-’80s teen comedies, a feat that many, many directors before have tried and failed to fully achieve. The reason why Carney succeeds, in addition to the wonderful performances of the young cast that he’s assembled, is a matter of tone, that bittersweet balance of sentimentality and authentic emotion, tempered by nostalgic longing.

While the growing romantic relationship between Conor and Raphina seems central on the film’s surface, it’s almost equally focused on the relationship between Conor and his older brother, Brendan (Jack Reynor), an earnest deadbeat who kindles and guides Conor’s offbeat artistic interests and ambitions. This culminates in one of most moving, visionary endings of any narrative feature from the past year, powerfully accompanied by Adam Levine’s gorgeous song “Go Now.” Several other songs in the film, and the scenes in which they appear, are indelibly catchy and memorable, especially “Up,” “A Beautiful Sea,” “To Find You,” and the phenomenal “Drive It Like You Stole It.” 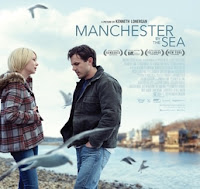 The complete opposite of Sing Street in its contained, downbeat energy, Kenneth Lonergan’s Manchester by the Sea concerns another working-class family, this time in an oceanside town on the north shore of Massachusetts. The film is masterfully constructed from an extended series of flashbacks that often shift abruptly in ways that rely on the formidable strength of the screenwriting and the audience’s intelligence. Having seen the film in New York on Thanksgiving, I admired how its exploration of family dynamics over time felt genuine in its representations of dysfunction; it refuses to offer any simple resolutions.

Lee Chandler (Casey Affleck, who should win the Oscar for Best Actor) is a repairman for several apartment buildings just outside of Boston. He’s called back to his hometown when his older brother Joe (Kyle Chandler) dies from heart failure. Joe expects Lee to care for his teenage son Patrick (Lucas Hedges), a task that Lee’s not fully ready to accept as an uncle, though he does accept it in his own distinct, low-key way, the same way that Lee does everything else. We find out only gradually why Lee is so low-profile and hesitant to return to his hometown, where he’s considered somewhat of a pariah.

Three or four scenes in this film are destined to become classics in cinematic history. This is partly due to Lonergan’s finely wrought script, which moves in ways that make his actors bravely ride along on his lines, as well as the complexity of the film’s performances. In a pivotal scene that takes place in a police station, Affleck navigates the thinnest margin of dialogue while the camera bears directly down on him. Michelle Williams, as Lee’s ex-wife Randi, matches him moment for moment during the film’s overwhelming emotional climax. The power of Manchester by the Sea is that of restraint which comes cascading down after waiting for most of the movie. 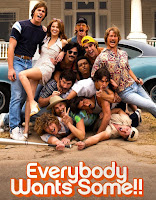 To be honest, I’m surprised that Richard Linklater’s Everybody Wants Some!! was nearly as enjoyable for me as his previous film, Boyhood, especially considering that they’re such different movies. Set in 1980 at a Texas university the weekend before a new school year begins, Everybody Wants Some!! takes place mostly in the frat house and nightclubs frequented by a fun and rowdy bunch of college baseball players, and a little bit on the baseball field during the team’s first batting practice of the season later in the film. At the center of the story is freshman arrival Jake Bradford (Blake Jenner), and the assortment of guys that surrounds him could not be hotter or more hilarious. Just how much fun did the people in charge of hair and costumes have while getting these actors coiffed and all dressed up? Quite a lot, apparently.

Imagine revisiting your college sports years and precisely revising every friend and memory, and that’s pretty much what Richard Linklater has done here. The jokes come quick as lightning, and the actors inhabit their wildly comedic roles as robustly as in any drama. Giving a rundown of each character’s “type” would belittle how smart the performances are, and it would also ruin the sweetness of discovery for anybody reading this who goes on to watch the film for the first time. Some viewers (and some hardcore Linklater fans) have complained that the film meanders too much, dull and plotless. But having a plot isn’t really the point. The story is in the characters themselves, an approach that’s quite true to life. Things don’t happen to us as much as people happen to us. Then things do or don’t happen to those people.

What happens amongst the people in this movie is one long, steady stream of competitive one-upmanship. Whether it’s ping-pong, video games, indoor basketball, darts, or knuckle flicking, these guys openly admit that they have to be the winners at everything they do, the kind of things that I remember doing with my older brother as a kid growing up in Ohio. John Waters has said that this is the gayest movie made by a straight director this past year, and he’s totally right about that. The guys chatter non-stop about cocks and butts, accompanied by plenty of playfully homoerotic narcissism as they all check out their own in the mirror, then go diving into a creek wearing only their jockstraps. Also, seeing McReynolds (Tyler Hoechlin, a former baseball player himself) in his at-bat stance as he splits baseballs in half by swinging an axe at them remains my favorite movie image of 2016. 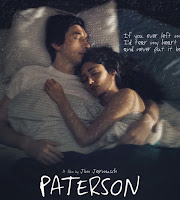 Jim Jarmusch’s Paterson is a movie that I knew I would love from the very first moment I read about it several months ago. Adam Driver plays the title character, a bus driver named Paterson who lives in Paterson, New Jersey, and reads William Carlos Williams’ poetry book Paterson, among other 20th-century American poets like Frank O’Hara. Paterson is also a poet himself. He jots down lines from poems in a notebook before his shift most mornings, he thinks through and revises poems in his mind while he’s driving on his bus route, and he keeps a writing routine in a small book-nook below the basement stairs in the boxy little home that he shares with his wife, Laura (Golshifteh Farahani). Laura might be described as having an inspiringly persistent creative streak. She paints designs all around the inside of their house each day, including on the cupcakes that she bakes to sell at the local weekly outdoor market.

Paterson is grounded in routines. It proceeds sequentially through the days of the week and the routines of each day, methodically and touchingly. We become familiar with the things that make Paterson and Laura (and their English bulldog, Marvin) content. But even though there’s a certain enchantment to be found in those familiar routines, that’s only the topmost layer of the movie. The strangeness just underneath it is what sets the whole film and its characters afloat. For instance, after Laura tells Paterson early in the movie about a dream in which she gave birth to twins, Paterson starts seeing pairs of twins everywhere he goes, an unsettling pattern that continues throughout the movie yet is mysteriously never explained or resolved.

When I first heard that Oklahoma-born New York poet Ron Padgett had written Paterson’s poems for the film, I knew that it would be exactly the right fit. Ron Padgett’s continually colloquial, laidback language translates seamlessly into Paterson’s own poems, which we hear read by Adam Driver with a halting resonance as they appear in handwritten script on the screen. The poems are consistent with the rest of Paterson’s world and the even balance of things that make him happy: overhearing passengers’ conversations on the bus when he’s driving, taking Marvin out for his ritual walk at night, stopping in for a beer at his favorite neighborhood bar. He’s like the famous Passaic River waterfalls in Paterson that he loves to sit silently before and watch, always flowing down gently and quietly, never changing shape or pace. Likewise, the relaxed pace and rhythm of Paterson are the film’s most distinctive features, and they’re totally Jarmusch’s own. 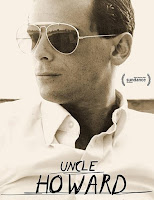 Jim Jarmusch also happened to be the executive producer of my favorite documentary of this past year, Aaron Brookner’s Uncle Howard, a rich and sensitive portrait of his late uncle, the filmmaker Howard Brookner, a gay man who died of AIDS in 1989. I already wrote about that film in greater detail in my annual review of the Provincetown International Film Festival back in June, and now I’ve seen the movie three times in total. Its depiction of Howard Brookner’s life, persona, and achievement in the three films that he completed in his short lifetime continue to linger with me at the start of 2017, just as the words of the film’s closing song by The Pretenders, “Hymn to Her,” still echo in my mind now: “They will keep on speaking your name / Some things change / Some stay the same.”
Posted by Jason at 7:50 PM 2 comments: