The debut full-length poetry collection that I’ve most anticipated reading over the past few years is John McCullough’s recently published book, The Frost Fairs. I met John where he resides in Brighton, England, a couple of years ago when I was visiting London for spring break. We had been introduced by our mutual friend Alfred Corn, and John and I exchanged our poems and shared enthusiasms via e-mail during the months leading up to our meeting in person. There aren’t very many people with whom I feel instantly at ease, but John McCullough is one of them.

It’s not difficult to see how the landscape of a place like Brighton has influenced the visionary tone and otherworldly spirit of John’s poems. After my arrival on the train from London, we walked down the steep road to the long beach covered with small round stones, a skeletal ghost of an abandoned pier to our right, and a bustling carnival of a still-active pier to our left. I felt the same way I did the first time I visited Provincetown on Cape Cod, another lively gay coastal town; I was entranced and slightly overwhelmed, yet the place intrinsically made sense to me. The day was brilliantly sunny and unseasonably warm, especially for early March in England. The sunlight reflecting off the harbor by the marina was so intense, in fact, that John left our outdoor lunch that day with a shiny red sunburn on one side of his forehead.

John is an inheritor of some important gay predecessors whose presence stands out in his work: the relaxed formalism of Thom Gunn, the earthy sublime of Mark Doty, the chatty stylishness of Frank O’Hara, who himself appears as a ghost-like image in John’s poem “Reading Frank O’Hara on the Brighton Express.” In the midst of watching John re-paint Brighton, I laugh every time I read the lines, “with different kinds / of queen walking different kinds of dog,” because it’s such a precise offhand observation. It also suggests a semi-scientific interest in the world that becomes the central subject matter of many of John’s other poems: clouds, weather, seashores, rock formations, planets, galaxies, or in John’s own words, “what keeps us awake on cold moonless nights, / plotting outer and earthly and inner space” (from his poem “On Galileo’s Birthday”).

The poet whose influence is most apparent in John’s writing, however, in both theme and style, is definitely Elizabeth Bishop, whose poetry John has closely studied. His seriousness about attending to the world’s infinite details, despite the frequent playfulness of the language, comes directly from her. The effect is not imitation, but rather a common understanding of the mechanisms of space, time, and the human heart. The way in which John navigates the relationship between inner and outer realms could itself be a kind of reading of Bishop’s work, as well as an expression of gratitude for the reliable companionship that her poetry has provided him. 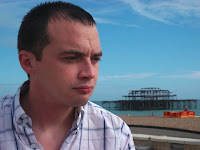 When accepting an award, Bishop once referred to her life and travels as “timorously pecking for subsistence along coastlines of the world,” an analogue for John’s routine walks around the coast of Brighton. In Bishop’s work and in John’s work, too, the ocean and what inhabits it are never very far away. And neither is the sky, or moreover, the cosmos. Witness how he chisels out the opening stanzas of “The Floating World,” wedding sky to ocean to earth:

“At noon, the sunlight richochets off white cliffs.

The oystercatcher blasts its kleep-a-kleep

but no one’s listening. In ruptured chalk, fossils

of iguanodon and mammoth strive

stretch wide, a tableau of thirst.”

Of course, somebody did hear the oystercatcher’s call, and then documented it exactly for us. This is a trick that John has down just as Bishop did; his attention is so intimate and engrossing that we forget he’s there — we forget, in fact, that he’s whispering into our ears. His presence in these poems is like the shifting shapes of clouds in his poem “Tropospheric,” or like the soundless, distant tide at night in “Motile,” images that surround us as much as they dwell somewhere within us.

History — often queer history — takes an equal place in The Frost Fairs. “The Other Side of Winter,” from which the book’s title is drawn, evokes fantastical images similar to some early scenes from Virginia Woolf’s novel Orlando, in which the River Thames freezes during an especially harsh London winter, the legendary “Great Frost” of 1683-84. For centuries, entire festivals would spring up right on the ice during such deep winters, with merchant markets, sports and skating, even theatre and other live entertainment occurring on the surface of the frozen river. John vividly imagines the end of one of these fairs:

The ice beneath the frost fair cracks. Tents,

merry-go-rounds and bookstalls glide about

on islands given up for lost. They race,

the swings — then part, slip quietly under.”

The rest of this magical poem — and that’s indeed the right word to describe it — is concerned with the male speaker’s encounter with a ship’s sergeant, and particularly with a pipe that the seaman gives to him (“Even now it carries his greatcoat’s whiff”), along with a promise that he’ll write. This is a poem that’s more like a film; I hesitate to give too much of it away. So to see whether or not that sailor’s promise is fulfilled, you’ll have to go and read the poem for yourself.

Also included in the book is “Georgie, Belladonna, Sid,” a poem that incorporates polari, a lexicon of coded slang invented and primarily used by gay men in the early 20th century in London’s Soho district. The poem comes complete with a glossary, so that readers can readily translate lines like, “Sid bats his ogle riahs / in ten minute spells,” and truly appreciate the poem’s mind-blowing close: “Each dusk I vada / the ripped-open, scattered rose sky and pray / to God for the safe return of my blackout.”

“The Empress of Mud” recounts the extraordinary tale of Marion “Joe” Carstairs (1900 - 1993), a rich British lesbian who dressed as a man, raced power boats, and purchased the Bahamian island of Whale Cay, which she then turned into a home for herself and her guests. As John does elsewhere in the book (during a hilarious series of dramatic monologues told from the perspective of a taxicab driver, for instance), he totally reanimates Carstairs’s voice here, in heightened stanzas that also feel appropriately down-to-earth:

“Lonely? I have too many friends to waste time

to a moon-faced girl in London, explaining

why I cannot return. There are flamingoes

in my garden. I am in Wonderland.

Perhaps I shall put down a lawn for croquet.” 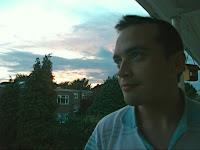 Not only is this mature, fully realized poem John’s rendition of Bishop’s remarkable “Crusoe in England,” but it’s also perhaps his most distinctive homage to Bishop herself. She, too, was a lesbian who revised and perfected the many places where she lived, if only through her attentive writerly and painterly eye. The poem’s reluctant conclusion — “And nothing I say or build is good enough” — seems to echo both the dedication and self-doubt that Bishop felt towards much of her own work.

At the core of John McCullough’s The Frost Fairs is a hard-won and solid-as-granite foundation, a lasting literary achievement that’s replete with range, control, and ambition. Regardless of how far this achievement carries him — and all indications promise that the ascent will surely be a lofty one — my affection will remain for the figure at the end of his poem “The Dictionary Man,” the lone boy who’s asleep at his desk, dreaming over the words.